UPPSALA – The dog, man’s best friend, can extraordinary contribute in the understanding of the most common diseases affecting human population. Dogs and humans, in fact, have a lot of common diseases with a similar aetiology, share the majority of their genes and are exposed to the similar environment. A Swedish research group, from the Department of Clinical Sciences of the Swedish University of Agricultural Sciences (SLU) in Uppsala and coordinated by Professor Åke Hedhammar, is working to identify genes and pathways responsible for genetic diseases in different dog breeds to help research on  the understanding of the same diseases in humans.

In Sweden there are one million dogs, more or less. Swedish dogs are unique, for the fact that are almost pure breed (85%) with all information about their ancestral background, and have an animal insurance system. This well organized system can help in collecting data on disease prevalence and distribution among breeds, which is an important component of the work of Åke Hedhammar and colleagues. 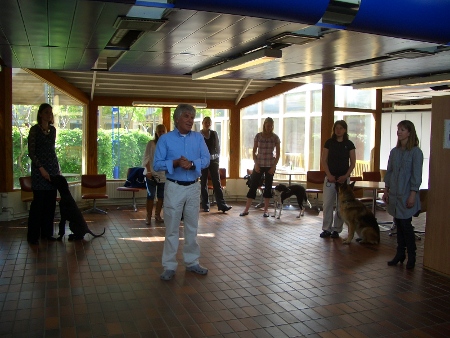 Professor Åke Hedhammar, colleagues and their four-legged hosts during the science journalists visit. Uppsala, May 26th 2011 (Photograph: A. Gilardini)

The observation of spontaneous illness subjects with the application of a multidisciplinary approach (clinic, genetic and research) leads to the build of the “Canine Biobank ” at SLU, in collaboration with Uppsala University . The Canine biobank  follows specific criteria of inclusion and collection of data and samples, making it comparable to other human biobanks around the world and useful for studying diseases now and in the future.

In some breed the feature of one disease is close to the one affecting humans but with much higher incidence , making that breed a valuable and reliable model for genetic and treatment research. For example, the Border Collies  tend to suffer from a specific form diabetes, the one close to the human disease that affect women during gestation. The German Shepherd have much more immunorelated disorders than other breeds, partly related to a relative IgE deficiency.

This four-legged friend is an investigational model on genomic  variations that cause atopic dermatitis (e.g. eczema), and also helps in studying as well the effects of the environmental factors on the disease, which are known to have a key role on its symptoms start.

Unfortunately, also neurodegenerative diseases are present. Epilepsy, for example, is one of the most common neurological disease in dogs. The incidence of epilepsy in dogs  is not tremendously high but higher than in human population (actually 40-50 per 100,000 in human adults). “The disease accumulates differently between breeds and is very difficult to make an aetiologic diagnosis” Hedhammar says. “Not everything’s is idiopathic (e.g. already presented in the subject and not due to external causes), which means that looking for good samples we’ve to work them up very carefully”.

Golden retriever dogs are a reliable model of sensory ataxic neuropathy (SAN). SAN is a neurological dysfunction characterized by the loss of sensitivity to the position of joint and body parts. A study conducted by two Grad students within the group, Karin Hultin and Izabella Baranowska, and published on PLoS Genetics found that SAN disorder in this breed has a mitochondrial origin, from a specific gene (tRNAtyr) that could be involved in mitochondrial respiratory chain and muscle function. 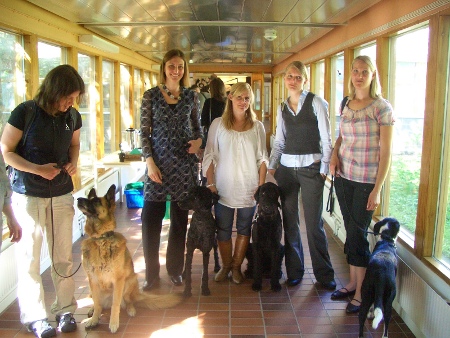 Professor Åke Hedhammar’s colleagues and their four-legged hosts during the science journalists visit. Uppsala, May 26th 2011 (Photograph: A. Gilardini)

“Mitochondrial disease is a fascinating new search field in human and veterinary medicine”, comment Hedhammar, coordinator of the study. ”We’re lucky when we came across a good canine model because that means that we have more data from much more individuals. You can find breeds that have family trees that help us to trace down on the maternal line the disease”. Hedhammar highlights how far we can track the history of a genetic mutation. “Looking at the pedigrees they found out a common ancestor of the affected dogs that lived in the 1970s. That’s a good example of how we can contribute with a piece of knowledge on the research of ataxic neuropathy”.

About brain tumors, gliomas have an incidence around 5-7 per 100,000  in human population. There are indications that gliomas are more prevalent in brachycephalic ( short scalp) breeds, e.g. bulldogs and boxers. This research field is still in progress. “We have particularly some groups involved in the genes behind short scalp that see if there are ancestries to get tools of the glioma, but glioma is a not very common disease and we have difficulties to find enough cases”, concludes Hedhammar.

Besides all the diseases there are also other variations in the phenotypes, included their behavior, anxiety, obsessive compulsive disorders and intelligence. But we’ll not reveal here which breed is more or less smart.

This article and the included interview to Prof. Åke Hedhammar are the result of my joining to the Travel Study Trip to Uppsala, Sweden (May 25-27th 2011). The trip was organized and funded by EUSJA (European Union of Scientific Journalists) and SFVJ (Vetenskapsjournalistik – Swedish Association of Science Journalists). I’d like to thank both the associations and SWIM (Science Writers in Italy), which I am a member of, that gave me the opportunity to live this great experience.